A table level share lock is placed on unindexed foreign keys in a child table when doing an update or delete on primary key column in the referenced parent table. the lock is realesed immediate after obtaining it. If multiple pk key are  updated or deleted  , the lock is obtained and released once per row .The obtaining and realesing of the shared lock are as follow as

The  share lock has only one purpose , to check whether you have pending transactions against any rows . If that case , the share lock request would fail becuse of exclusive row locks.

Prior to Oracle 9i
No comments:

Email ThisBlogThis!Share to TwitterShare to FacebookShare to Pinterest
Labels: Roll back, Save point, Unindexed Foreign Keys

Data is distributed in extremely small increments across all disks and adds one or more disks that contain a Hamming code for redundancy.This is not considered commercially viable due to the added disk requirements (10 to 20 percent must be added to allow for the Hamming disk.
The use of the Hamming(7,4) code (four data bits plus three parity bits) permits using 7 disks in RAID 2, with 4 being used for data storage and 3 being used for error correction.

RAID 2 is the only standard RAID level, other than some implementations of RAID 6, which can automatically recover accurate data from single-bit corruption in data. Other RAID levels can detect single-bit corruption in data, or can sometimes reconstruct missing data, but cannot reliably resolve contradictions between parity bits and data bits without human intervention.

Transaction rate is equal to that of a single disk at best .

One of the side effects of RAID 3 is that it generally cannot service multiple requests simultaneously.

In our example, a request for block "A" consisting of bytes A1-A6 would require all three data disks to seek to the beginning (A1) and reply with their contents.A simultaneous request for block B would have to wait.


RAID Level 3 requires a minimum of 3 drives to implement

Very difficult and resource intensive to do as a "software" RAID

Consider Personal computer they come with more than enough memory, have more than enough processing power, and have lots of disk space. The one thing they don’t come with is a backup (or external) drive. if User need to protect their important files, such as e-mails, pictures , and all .Many homeowners don’t think about backups. They go on merrily for years, adding their financial data, their photographs, and their collections of e-mail to their hard drives. Then one day they realize about the hard drive failure. Their hard drive fails, their computer won’t boot . What about servers do they come with extra disks? Usually, yes, servers are ordered with extra disks. Depending on the model of the server, you will have a different number of options and disks available. The primary reason for extra disks, besides the need for disk capacity, is to protect yourself through the utilization of RAID in the event of a hard disk failure.

For example, Figure below shows one possible RAID configuration. In this Figure , three hard drives are tied together to appear as one. The same data gets written to all three drives. Because the three drives are mirror images of each other, we can trash one of the drives and still have access to our data on the other two. We can even trash two drives, leaving just one good one. 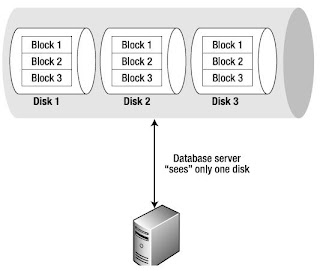 RAID can also be utilized to improve performance. Knowing how to do that can be
helpful when trying to performance tuning queries. The faster you can read and write data to and from your disks, the faster your response times will be. You can use RAID to increase your I/O throughput by taking advantage of
striping your data across several disks at once.

For example, a traditional hard disk has a little arm inside of it that moves back and forth every time you want to read and write data. IF you had to do 50 read and 50 write operations, and each one took 1/50th of a second. Then it will take Two seconds on one disk . Now, configure RAID as shown in Figure below 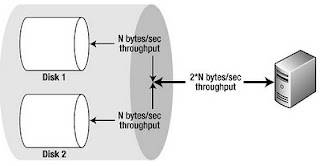 Now you have two little arms moving back and forth across two disks at the same time. You would still have your two hundred operations to perform, but they would be done on two drives simultaneously. Each individual drive would get half the work. Your overall time would be reduced from two seconds to one second.
Another method for improving performance would be caching. Most RAID controllers
allow for some amount of data to be stored in cache.

RAID uses two methods to provide for fault tolerance: mirroring and parity. Mirroring is exactly what it sounds like: you have two (or more) copies of your data on two (or more) different disks. As in Figure 1

Parity occurs when you add extra data called parity data to one of your disks, which can then be used to reconstruct your real data when one disk fail

Raid Level 0 (RAID 0) - Striped Disk Array without Fault Tolerance: Provides data striping (spreading out blocks of each file across multiple disk drives) but no redundancy. This improves performance but does not deliver fault tolerance. If one drive fails then all data in the array is lost.

RAID 0 is also used in some gaming systems where performance is desired and data integrity is not very important.#and in Video Production and Editing,
,Image Editing, Pre-Press Applications,any application requiring high bandwidth

A RAID 1 creates an exact copy (or mirror) of a set of data on two or more disks. This is useful when read performance or reliability are more important than data storage capacity. A classic RAID 1 mirrored pair contains two disks

One Write or 2 Reads possible per mirrored pair.Twice the Read transaction rate of single disks, same Write transaction rate as single disks.100% redundancy of data means no rebuild is necessary in case of a disk failure, just a copy to the replacement disk.Simplest RAID storage subsystem design

This level is also known as striping with parity. It is very similar to RAID 0, with one additional disk needed to hold the parity bit that gets striped across all disks. . Without a doubt, RAID 5 is a favorite RAID level,
and I have seen it used by many administrators.The reason for RAID 5 being so well liked is that if one disk fails, you simply have to add in a new disk (before a second disk fails; otherwise, you lose everything) and the array will rebuild itself. While RAID 5 can offer better performance than RAID 1, the overhead for that parity bit means it will not perform as well as RAID 0. But you do get fault tolerance with RAID 5, and that is why so many administrators love using RAID 5 over anything else.